You’re almost as likely to find Dickie V on the streets of his hometown as you would behind the microphone during hoops season! Learn about Dickie V’s latest activities—from a scholarship event with the Boys and Girls Club to a fundraiser in downtown Lakewood Ranch, there is never a dull moment when Dickie V’s around Sarasota! 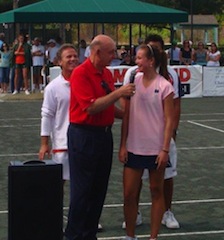 What a fantastic day of championship tennis at the Lakewood Ranch MetLife Intercollegiate Tennis Tournament.  First up was the women's final featuring Miami's Bianca Eichkorn versus Notre Dame's, Chrissie McGaffigan.  I introduced the players to the crowd before the match. 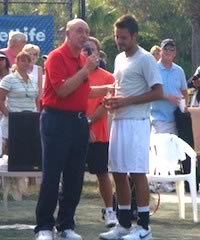 Eichkorn played beautifully and proved to be too much for the Notre Dame sophomore.  It was a great weekend for McGaffigan though and she has much to be proud of. 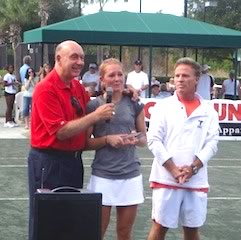 The points were long and tough and in the end it was Bangoura pulling the match out in three sets. 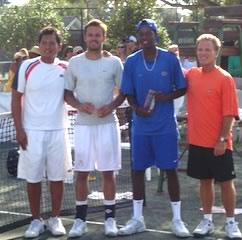 It was an incredible weekend of elite college tennis and i know everyone in the Lakewood Ranch community was so pleased to see such a quality event brought to our area. 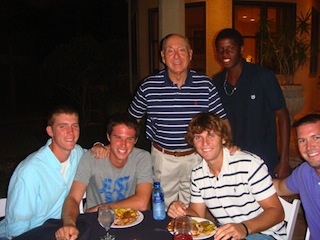 I was thrilled to host a party for all 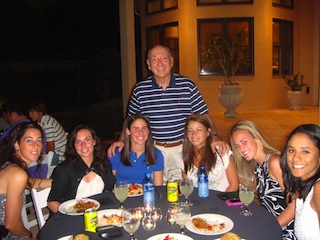 the players, coaches and sponsors for the MetLife Intercollegiate Tennis Tournament being held at the Lakewood Ranch Tennis facility.  The weekend tournament featured teams from across the country including, Notre Dame, Pepperdine, Florida, Arizona, Temple, Mississippi, Miami, Minnesota, among others.  The tournament featured men's and women's singles, as well as men's and women's doubles.  Chris Marquez and Paul Lederman from the Lakewood Ranch Tennis Club did a fantastic job organizing the weekend.  It was first class and the players and coaches were amazed at how they were treated, and how professionally the tournament was run.  Great job Chris and Paul on bringing elite college tennis to our area! 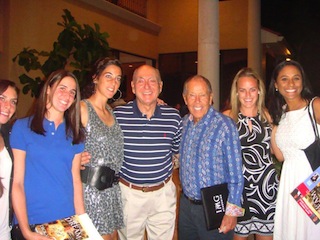 Friday night, my wife and I hosted a party at our home for the players.  We were honored to have tennis legend, Nick Bollettieri, come and speak to all the players and coaches.  I can't wait to watch the final matches today - the men's final features Sekou Bangoura, Jr from the University of Florida and a Lakewood Ranch native versus Arizona's Andres Carrasco.  The women's features Notre Dame sophomore Chrissie McGaffigan against Miami's Bianca Eichkorn. 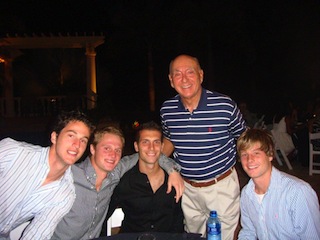 Bucs vs Saints Game in the Glazer Family Suite 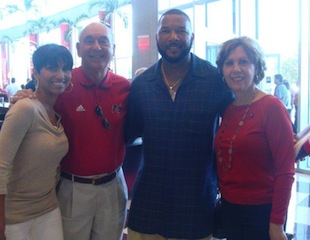 I was a guest of the Tampa Bay Bucs ownership, the Glazer Family, for the game on October 17th against the New Orleans Saints.  My wife and I had a blast meeting celebrities like former major league star, Gary Sheffield, and former Bucs and USC players, Richard Wood and David Lewis. 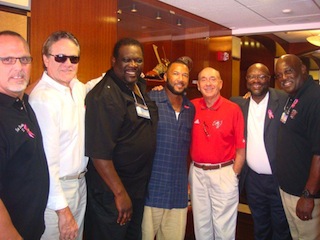 It was a terrific afternoon, unfortunately the Saints were just too much for the Bucs.  I can't thank the Glazer Family enough for inviting us to share in the game from their breathtaking suite. 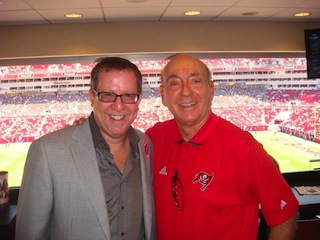 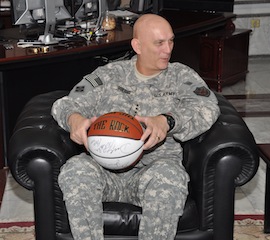 My good friend and longtime NBA referee, Bob Delaney, visited our troops this summer in Iraq.  During Bob's meeting at the Al Faw Palace in Baghdad (Saddam's former palace and now headquarters for US Forces Iraq), Bob presented a ball I autographed to General Odierno.  The personal inscription on the ball read, "General O - You are AWESOME BABY!"  Like my good friend Bob, General Odierno and I are fellow Jersey boys!!!  I can't thank him and ALL our troops overseas for what they do on a daily basis for us.  I am so thankful to be an American and to have such brave and wonderful people fighting everyday for our freedom and protection.

I know Bob had a wonderful trip visiting our troops in Iraq.  He has shared so many of his stories from his visit with me and I am thankful he was able to provide a small token of my appreciation to General Odierno. 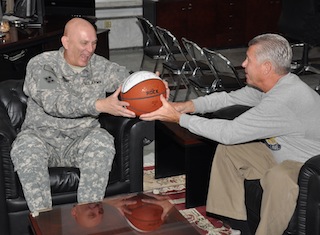 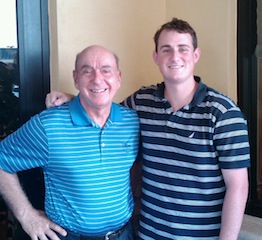 I had a wonderful morning today with Dan Will at the Broken Egg Restaurant in Lakewood Ranch. Dan, a resident of Delray Beach, was an auction winner from the organization "Taking Back Lives."  This is a local organization that works to bring education and other resources to the residents of Malawi, Africa.  Dan was such a delight to meet and talk to.  He is preparing to begin an internship with the New Orleans Hornets NBA team in the broadcast division.  I wish him all the best! 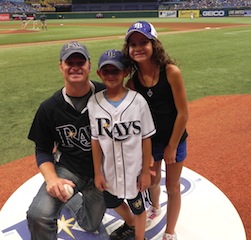 We had fun despite the Tampa Bay Rays losing to the Angels yesterday.  Two of my grandkids, Ryan and Sydney, had the thrill of getting on the field at The Trop to bring out the game ball and place it on the pitcher's mound for the start of the game.  The had a blast and my grandson even received an autographed bat from Rocco Baldelli.  The Community Relations office for the Rays treated them like royalty, baby! 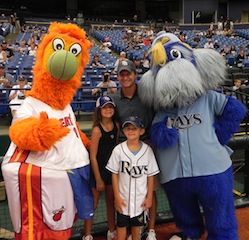 Hoping the Rays can bounce back from recent losses and gain some momentum again! Go Rays!!! 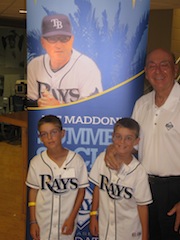 What a fun gathering after the Rays/Orioles game on Sunday, August 15th.  The Rays pulled out a close 3-2 win over the Orioles behind the young talented pitching of Jeremy Hellickson.  After the game, Joe Maddon hosted a private gathering at the Trop to raise money for the Rays Foundation. 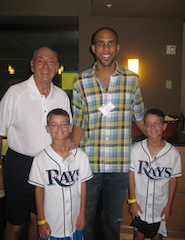 At the party were a host of Rays players, including David Price, Evan Longoria, Carl Crawford, Ben Zobrist, B.J. Upton, Matt Garza and many others.  It was great spending time with the players and talking about their quest towards to the post-season.  Joe Maddon is a terrific leader of the team, and a great person. It was a great day a the ballpark!  Go Rays! 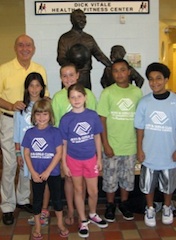 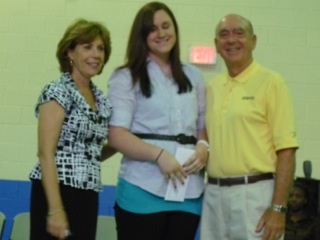 Lee Wetherington Club
Alexi Montero, graduated Booker High School and will be attending Johnson & Wales University in Miami, FL,where he will major in Culinary Arts/ Business.  Alexi has been a member of the Lee Wetherington Club for the last 13 years.

Gene Matthews Club
Sofia Gilot, graduated North Port High School and will be attending the Indian River College in Fort Pierce, FL,where she will major in nursing.  Sofia has been a member of the Gene Matthews Club for the past fiveyears.

Guy Guenther, graduated North Port High School andwill be attending the University of West Florida in Pensacola, FL, where he will major in political science.  Guy has been a member of the Gene Matthews Club for the past 10 years. 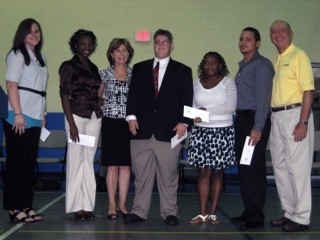 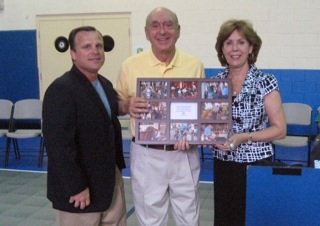 The kids at the Boys & Girls Clubs work hard to be champions, and I’m happy to have the opportunity to work with them and to help them continue on this path to success. 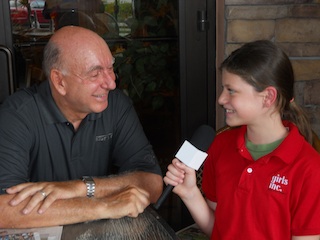 I had a blast being interviewed by the incredible young girls of the Girls, Inc. Sarasota.  The motto of Girls, Inc. is to raise girls to be strong, smart and bold...and I can assure you that the girls that I met are just that!  The girls create, video, edit and do all their own work to produce a half-hour program that airs every week on Saturday mornings from 7:30am - 8 am on the local ABC affiliate in Sarasota.  It is called Girl TV and this week they dedicated the half hour show to my favorite topic: basketball!  I was interviewed by adorable, 10 year old Maddie for their "Inspiring" segment.  In the end, I think I was the one who ended up to be inspired by their hard work and commitment.  I was honored to be a part of their show and had a great time meeting the girls. 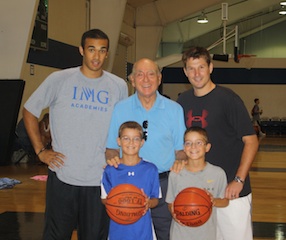 I had a great time this week watching my twin grandsons participate in the basketball camp at IMG Academies in Bradenton, FL.  IMG is home to some of the best training for a variety of sports, including, tennis, basketball, baseball, golf, lacrosse, and football.  My daughters trained at the academy for tennis when they were in high school, so I have spent a lot of time at the academy and have enjoyed watching it grow into such a wonderful place for athletes to train.  Andy Borman, a former Duke University player, does a fantastic job running the basketball program.  The kids are taught the basic fundamentals of the games and most importantly, the right technique.  It is always a lot of fun for me to watch youngsters develop their games and see how much passion and spirit they have for the game. 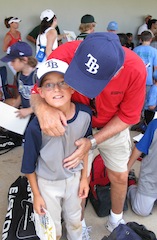 I had a great time June 18th watching my twin grandsons participate in Tampa at the Tampa Bay Rays Advanced Youth Baseball Camp.  Pete Myata, who works in the PR/Community Relations department of the Rays, does a phenomenal job organizing these weekly camps in the summer for the local youth.  My grandsons love being a part of the camp and learning new skills from the  coaches.  Pete asked if I could share a few words to the campers at the end of the session on Friday.  I was happy to talk to them about the importance of having dreams, never believing in the word can't, and making good choices in their life.  I love having the opportunity to talk to the youngsters, because our future inevitably lies with them.  It was a fun afternoon and a terrific camp - GO RAYS! 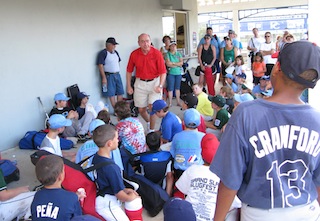