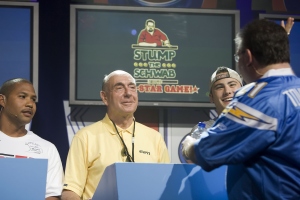 What a blast I had in Orlando, FL this weekend as a part of the ESPN The Weekend event at Hollywood Studios. The weekend was filled with all sorts of games, contests, sports stars and loads and loads of fun. I took part in The Stump the Schwab game with Bill Laimbeer and Scottie Pippen, talked baseball with Karl Ravech and Astros players, Lance Berkman and Roy Oswalt, on the set of Baseball Tonight, officially opened the park on Main Street, was a judge for The Dream Job with Maurice Jones-Drew of the Jaguars, and lots, lots more.

It was so much fun - I was like a little kid meeting all the sports stars and going on all the rides at Disney with my family. Dick's Sporting Goods was the presenting sponsor for the event and it was truly first class and an absolute blast!