I miss my sports! At least we had a little on Sunday.

More cancellations. The 2020 Hall of Fame Open and the International Tennis Hall of Fame Class of 2020 Induction Ceremony will not take place this July as a result of COVID-19.

We did get NASCAR back, golf and more UFC. Hopefully more will return soon.

It was another slow sports week. Fortunately the NFL and UFC kept fans busy.

Justin Gaethje beat Tony Ferguson and Henry Cejudo defeated Dominick Cruz at UFC 249 in Jacksonville. It was nice to have a live sporting event.

The NFL schedule was released. The defending Super Bowl champion Kansas City Chiefs open the season against the Houston Texans in a playoff rematch.

I’m excited as Tom Brady and Drew Brees are scheduled to meet in week one. The Bucs and the Saints should we awesome baby!

Let’s hope we can start the season on time!

A major coaching change as Steve Forbes, who won 30 games at East Tennessee State last season, was hired at wake Forest. He took over for Danny Manning.

More cancellations were announced, including the Little League World Series and the NBA Draft lottery. 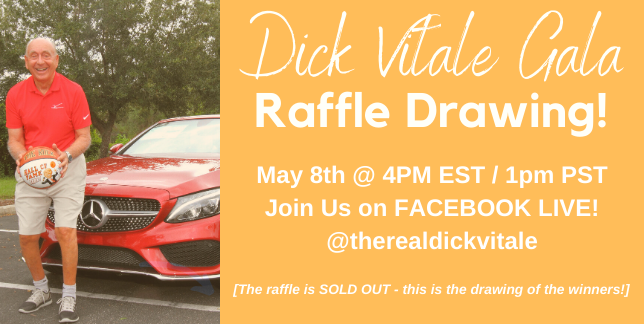 Lots of sports news this week.

Congrats to LSU’s Joe Burrow, the top pick in the NFL draft. He will shine as a Bengal. Chase Young went second to Washington.

There were a handful of trades, including Trent Williams going to the Niners.

Baseball news as Alex Cora was suspended for the 2020 season.

Dick's Blog
Another week of no sports in the books.
I have been watching concerts on TV. I did see a little of the WNBA draft and was happy for Sabrina Ionescu.
This week will be exciting with the NFL draft.
Continue reading

Some sports news this week. The college basketball awards were announced.

The NFL’s All-Decade Team was also announced. Among the stars from 2010-19 included Tom Brady, Adrian Peterson, Aaron Rodgers and Aaron Donald made the list.

Another tough week for the sports world. A number of events were postponed or cancelled, led by Wimbledon.

One positive was the announcement of the newest class of the Basketball Hall of Fame. The late, great Kobe Bryant, Kevin Garnett, Tim Duncan, Eddie Sutton, Rudy Tomjanovich, Tamika Catchings, Kim Mulkey, Barbara Stevens and Patrick Baumann will be inducted in Springfield. Congrats to a great group.

Dick's Blog
This would have been the week we looked at the Final Four.

Instead we are talking about a virus.

At least there was some sports news. More NFL free agent signings. College basketball players declaring for the draft. Others transferring. Coaching changes.
Sports figures made major donations towards helping the coronavirus struggle. Drew Bree, Steve Ballmer, LeBron James and Mark Cuban were among the many to give.
Continue reading

While most sports were silenced during the pandemic, the NFL was very busy.

There were plenty of free agent signings, led by Tom Brady going to the Bucs. The Colts added Phllip Rivers, the Panthers signed Teddy Bridgewater. The Saints re-signed Drew Brees.

In one day, several big names were traded. DeAndre Hopkins, David Johnson, Stefan Diggs and DeForest Buckner were all dealt.

Others like Todd Gurley were let go and signed elsewhere. Gurley landed in Atlanta.

In fact, fans of all sports were shocked by various cancellations.

There was no other choice by the NCAA but to cancel Mach Madness.

My heart goes out to all the players, coaches and fans, etc. that dreamed of being part of this magical tournament. However, this is the time where sports had to take the back seat to the concerns of public health. Salute seniors like Markus Howard of Marquette, Myles Powell of Seton Hall, Payton Pritchard of Oregon and Cassius Winston of Michigan State, who played their last game.

Luka Garza of Iowa was a junior and Obi Toppin of Dayton was a sophomore. They have remaining eligibility, but odds are they will enter the NBA Draft.

I have often said March Madness is one of the greatest sporting events. This year it was sent to the sidelines.

There was other news as Rick Pitino is back on the sidelines. He accepted the Iona job and I believe he will have them as a mid-major power within three years.

I had a blast calling the Kansas-Texas Tech game. Lubbock had an electric atmosphere.

The Jayhawks have the best duo in America in Devon Dotson and Udoka Azubuike and they led Kansas to the winner’s circle for the 16th straight time.

Tickets were punched for the big dance. Congrats to Utah State, upset winners over San Diego State, and Belmont of the OVC for getting the first two.

I had a blast calling two games this weekend.

The atmosphere at Dayton was incredible. The Flyers extended their win streak to 18, clinching the A-10 regular season title by beating Davidson. Obi Toppin showed why he is a player of the year candidate, dunking, passing, defending, scoring. He was brilliant.

Then we called a great Duke-Virginia game. The Cavs moved to within a game of first in the ACC. It was a defensive duel and Jay Huff has a special performance, scoring and blocking shots. His 12 rejections were two short of Ralph Sampson’s school record.

Duke was held to a season-low 50 points.

It was an exciting sports weekend.

Baylor, Gonzaga and San Diego State saw long win streaks snapped. Kansas got a big win at Baylor, led by Uduoka Azuibuike with 23 points and 19 rebounds. BYU blew out Gonzaga while UNLV handed the Aztecs their first loss of the season.

I called the Florida-Kentucky game and I love going to Rupp Arena. Big Blue Nation is such a passionate fan base.

Tyson Fury was so impressive in a seventh round TKO over Deontay Wilder.

It was a busy basketball weekend.

The NBA All-Star game in Chicago had many memorable moments.

Team LeBron and Team Giannis put on a show.

In college hoops, I called Duke’s impressive win over Notre Dame. Vernon Carey was impressive inside.

It was a very powerful, emotional and historic day as Robert Montgomery returned to Assembly Hall for the first time since September 10 , 2000!

Now Indiana needs to put a statue in from of Assembly Hall to honor The General.

Meanwhile I enjoyed calling the game which saw Purdue get a big road win.

The Kansas City Chiefs won the Super Bowl in Miami

It was great for Andy Reid, Patrick Mahomes and the comeback kids. They rallied from 20-10 down to prevail.

Congrats to the new class of the Pro Football Hall of Fame. Edgerrin James, Steve Atwater, Steve Hutchinson, Troy Polamalu and Isaac Bruce are worthy of the honor.

I had a great time at The Phog calling Kansas’ win over Texas Tech. Both teams are so well-coached.

The entire Sports World mourning the passing of Kobe and those with him in the helicopter crash including his 13 year old girl Gianna. What a terrible tragedy.

I was very impressed watching the number one team in America, the Baylor Bears. Scott Drew’s team was impressive in a win at Florida.

The Bears play hard on both ends of the court. They are outstanding defensively and do a great job on the offensive glass. Freddie Gillespie is one of the best stories in college basketball. He came from Division III Carleton College to become a factor.

I believe Baylor is a legitimate Final Four contender.

The Australian Open has had some drama. Roger Federer and Nick Kyrgios winning dramatic four=hour matches. Serena Williams was upset in the third round. It is the first major of the year.

One week til the Super Bowl. I like Kansas City to win the game.

The Tennessee Titans have become a huge story. Beating the Patriots and Ravens in consecutive weeks is special.

Derrick Henry has been putting up monster numbers. The Titan defense has been making big plays, including stopping Lamar Jackson twice on fourth-and-one plays.

College basketball saw a lot of great moments. Clemson snapped a 0-59 streak at Chapel hill, winning at North Carolina. Baylor won for the first time at Allen Field House, impressively beating Kansas. Syracuse won at Virginia after being humiliated by the Cavs earlier in the season.

I called the Memphis-South Florida game. Great to see Penny Hardaway and Brian Gregory. It was a tough loss for USF, which had a 14-point lead in the second half.

The Tennessee Titans have become a huge story. Beating the Patriots and Ravens in consecutive weeks is special.

Derrick Henry has been putting up monster numbers. The Titan defense has been making big plays, including stopping Lamar Jackson twice on fourth-and-one plays.

College basketball saw a lot of great moments. Clemson snapped a 0-59 streak at Chapel hill, winning at North Carolina. Baylor won for the first time at Allen Field House, impressively beating Kansas. Syracuse won at Virginia after being humiliated by the Cavs earlier in the season.

I called the Memphis-South Florida game. Great to see Penny Hardaway and Brian Gregory. It was a tough loss for USF, which had a 14-point lead in the second half.

The Titans, behind the running of Derrick Henry, shocked the Patriots. New England lost its last two games, both at home. Now there will be off-season questions about Bill Belichick and Tom Brady.

The Bills had a 16-0 lead but the Texans rallied and won in overtime. Deshaun Watson made the big play that led to the winning field goal.

The Vikings pulled off another upset, beating the Saints in overtime.

I called the Florida State-Louisville game and was so impressed by the Seminoles. Leonard Hamilton has something special with tenacious defenders and plenty of scoring threats. They are a top 10 team in my opinion.

“Drew Rasmussen had a special outing, taking a perfect game into the ninth inning vs. Baltimore. The O’s broke it up."